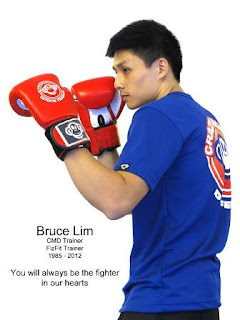 I still remember that very day that my ex-manager showed me the Whatsapp message on her Iphone. The message was sent by Bruce to inform our manager that he was diagnosed with stage 4 liver cancer, if I can recall that message also said that the cancer cells had spread to his lungs. I was stunned, held my breath for a moment, holding back my tears. It was pretty depressing period for me – I just started being colleagues with him for 1 month plus in the same fitness center, although we’ve known each other since 2009 through the fitness professional circle. That short period being Bruce’s colleague, the interaction, conversation and support we had for each other, just brought us close together.

Bruce went through the operation to remove the tumor. Came back to the gym on the day he was discharged from hospital, looking high spirited. It was just great to see him carrying such energy despite the circumstances he was in. I resigned from that fitness center and went back freelancing as well due to personal reasons.

I visited him 2 weeks later after he was discharged, at his house. That was in August 2012. He looked as if he did not go through any operation. He gained the weight he lost, looking as cheerful as before. I was glad, and confident that he will be back training people again soon. I had lunch with him at his house on that day. He sent me off as I was leaving, with a cheerful smile. In my mind, I wanted to take a picture with him before I left, but I was just confident that we can take a photo together when we start training in gym again soon.

Time passes, I was getting busier with work as a freelance trainer again. Next thing I knew on Thursday, 8th Nov 2012, his facebook status was updated saying that he has passed on. I just can’t control tears from my eyes. I should have know, but I’m glad I had lunch with him at his house, and saw his cheerful smile when he sent me off from his house. That was the last time.

He’s one of the most soft spoken, cheerful, humble or should I even say nicest person I ever meet in the fitness industry. Rest in peace, my friend.